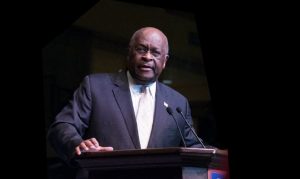 According to reports, the jovial business magnate died on Thursday.

Cain, who was 74 years old, had been hospitalized for COVID-19. He had gone into an Atlanta hospital on July 1st.

Cain’s death was also reported by Newsmax, which Cain recently joined, by posting an obituary confirming he died on Thursday.

Herman Cain, the former Republican presidential candidate and affable business magnate, died Thursday after being hospitalized for coronavirus, according to reports.

Cain, 74, first went to an Atlanta hospital for treatment on July 1st, his staff had said.

Cain also survived stage 4 colon cancer. Whether or not that fact contributed to the coronavirus death is not known.

You're never ready for the kind of news we are grappling with this morning. But we have no choice but to seek and find God's strength and comfort to deal… #HermanCain https://t.co/BtOgoLVqKz

Our hearts grieve for his loved ones, and they will remain in our prayers at this time. We will never forget his legacy of grace, patriotism, and faith.

I write for http://DefiantAmerica.com, http://aleadernotapolitician.com/ https://magamedia.org/ and http://FreeAmericaNetwork.com & Graphic Artist & Video producer. I adore journalism. Politics seems to be my preferred genre although I do not hesitate to write anything that strikes me as interesting. Researching and finding 'Breaking News' makes my blood rush. I've written seventeen books. and over that including books in conglomeration with others. Doing graphic art design has always been fun for me. Sometimes I incorporate this talent into my articles or when a special 'feature picture' is required. You can find me tweeting on: https://twitter.com/DavedaGruber You can always find my articles on the sites I write for.
View all posts by Daveda →
Tagged Herman Cain. Bookmark the permalink.