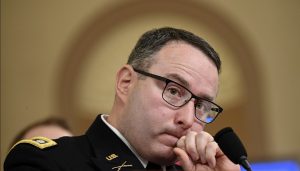 On a radio show “Geraldo in Cleveland” which is a Fox News Radio affiliate WTAM, President Trump made some remarks that enlightened the public as to the reaction of how people inside the White House reacted to Lt. Col. Alexander Vindman being removed.

Vindman, who was one of the key impeachment witnesses in the House impeachment inquiry, was escorted out of the White House last Friday, February 7th, along with his twin brother Yevgeny Vindman, another Army lieutenant colonel who worked at the NSC.

Yevgeny Vindman worked as an attorney who focused on ethics for the NSC and did not testify in the inquiry.

It appears that White House staff applauded as the brothers were removed.

Trump told the radio show, “Vindman was the guy that, when we took him out of the building, the building applauded. I don’t know if you heard that. The whole building, many people in the building started applauding.”

Trump went on to say that he had never met Vindman but thought his actions were “very insubordinate.”

While referring to Vindman’s complaint about the president’s phone call with Ukraine Trump stated, “First of all, that’s very insubordinate, why wouldn’t he go to his immediate – he went to Congress or he went to Schiff or he went to somebody.”

Vindman’s lawyer, David Pressman said in a statement that his client was escorted out of the White House complex, told to leave in retaliation for “telling the truth.”

Well, if telling the truth is allegedly fabricating a recollection that he had no firsthand knowledge of to others is “telling the truth” I’d have a lot of stories to tell.

In the meantime a handful of the House’s 17 witnesses still remain in their posts.

I write for http://DefiantAmerica.com, http://aleadernotapolitician.com/ https://magamedia.org/ and http://FreeAmericaNetwork.com & Graphic Artist & Video producer. I adore journalism. Politics seems to be my preferred genre although I do not hesitate to write anything that strikes me as interesting. Researching and finding 'Breaking News' makes my blood rush. I've written seventeen books. and over that including books in conglomeration with others. Doing graphic art design has always been fun for me. Sometimes I incorporate this talent into my articles or when a special 'feature picture' is required. You can find me tweeting on: https://twitter.com/DavedaGruber You can always find my articles on the sites I write for.
View all posts by Daveda →
Tagged Alexander Vindman, Yevgeny Vindman. Bookmark the permalink.