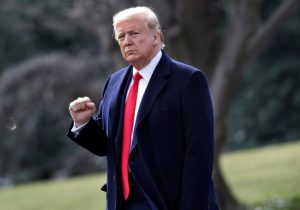 On Friday over two hundred Democratic congressional lawmakers got some bad news but on the other hand, it was great news for President Trump.

A Federal appeals court ruled unanimously that the lawmakers do not have a standing to sue the president for allegedly violating the Emoluments Clause over foreign payments to his businesses.

In its ruling, the Court of Appeals for the D.C. Circuit said, “Because we conclude that the Members lack standing, we reverse the district court and remand with instructions to dismiss their complaint.”

The ruling went on to say. “The [House] Members can, and likely will, continue to use their weighty voices to make their case to the American people, their colleagues in the Congress and the President himself, all of whom are free to engage that argument as they see fit. But we will not –indeed we cannot – participate in this debate.”

Added to the document was “the Constitution permits the Judiciary to speak only in the context of an Article III case or controversy and this lawsuit presents neither.”

The Emoluments Clause is appears in Article 1, Section 9 of the Constitution and states that “No Title of Nobility shall be granted by the United States: And no Person holding any Office of Profit or Trust under them, shall, without the Consent of Congress, accept of any present, Emolument, Office, or Title of any kind whatsoever, from any King, Prince, or foreign state.”

It appears that the two hundred Democrats were certain that Trump had broken the law when they filed the complaint.

Trump was on his way to North Carolina for an event when he held the papers that showed that he won the case. He was outside the White House going to board Marine One.

He stopped to chat with reporters and told them, “It was a total win.”