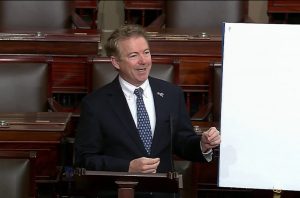 Last week I wrote an article that showed that Senator Rand Paul R-Ky., tried to submit a question to Chief Justice John Roberts during the impeachment trial of Donald J. Trump in the Senate.

Roberts rejected the question and it was disallowed.

The question was tweeted by Paul after it was blocked by Roberts.

On Tuesday, after describing his question and the fact that it was blocked by Roberts, Paul announced that he would read his question on the Senate floor.

Paul is known as a leaning Libertarian type of Republican and he’s also known to be well versed in the Constitution.

The reasoning behind Paul naming the two name was that of concern of a plot to take down President Trump.

Paul continued, “My point is, is by having such protection, such overzealous protection, we don’t get to the root of the matter of how this started. Cause this could happen again.”

Here is Rand Paul telling the Senate his question:

I write for http://DefiantAmerica.com, http://aleadernotapolitician.com/ https://magamedia.org/ and http://FreeAmericaNetwork.com & Graphic Artist & Video producer. I adore journalism. Politics seems to be my preferred genre although I do not hesitate to write anything that strikes me as interesting. Researching and finding 'Breaking News' makes my blood rush. I've written seventeen books. and over that including books in conglomeration with others. Doing graphic art design has always been fun for me. Sometimes I incorporate this talent into my articles or when a special 'feature picture' is required. You can find me tweeting on: https://twitter.com/DavedaGruber You can always find my articles on the sites I write for.
View all posts by Daveda →
Tagged impeachment hearings, Rand Paul, whistleblower. Bookmark the permalink.