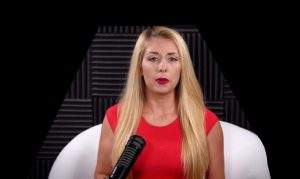 One thing leads to another and it usually does just that. On Friday Infowars reporter Millie Weaver was arrested on an alleged secret indictment.

There is a lot of speculation surrounding her arrest due to the timing. Her movie which names and shows many government contractors involved in “Shadow Gate.”

Weaver was arrested and as a matter of fact, it is being considered an abduction by some.

Two whistle-blowers can be seen giving information and this is looking BIG!

Also, Weaver took a video of her own arrest and it can be seen in the video below.

Here is a video that shows how deep it gets.

After you see how eerie and creepy it gets, you can watch the movie that has been released early because of the arrest.

Allegedly, a Portage County Jail administrator said that Weaver is being charged with alleged “robbery, tampering with evidence, obstruction justice, and domestic violence.”

Could they believe that her arrest was pure coincidence that it came just before her movie was to be released?

Her movie is being called a conspiracy theory by some but we know that a lot of things are referenced as conspiracy when those involved in alleged crimes don’t want too many to believe what they see.

Before it gets removed, the full movie can be seen here:

There are some big names on both sides of the aisle being exposed. This much I believe. There are people in government in the Democratic Party as well as the GOP who know and participate in cover ups because they are involved in corruption and they do not want to be unmasked.

I do not like to write about potential conspiracy theories but watch the videos and come to your own conclusions.

I write for http://DefiantAmerica.com, http://aleadernotapolitician.com/ https://magamedia.org/ and http://FreeAmericaNetwork.com & Graphic Artist & Video producer. I adore journalism. Politics seems to be my preferred genre although I do not hesitate to write anything that strikes me as interesting. Researching and finding 'Breaking News' makes my blood rush. I've written seventeen books. and over that including books in conglomeration with others. Doing graphic art design has always been fun for me. Sometimes I incorporate this talent into my articles or when a special 'feature picture' is required. You can find me tweeting on: https://twitter.com/DavedaGruber You can always find my articles on the sites I write for.
View all posts by Daveda →
Tagged Millie Weaver, Shadow Gate. Bookmark the permalink.