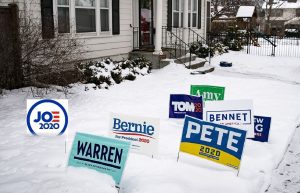 The Kick Off to this week was found on Super Bowl Sunday as one of the San Francisco 49ers decided to proclaim, before the game started, that he wouldn’t be going to the White House.

You are correct Richard Sherman.

The Chiefs will go instead.

No Elizabeth Warren, you are not invited.

President Trump sent congratulations to Kansas, and many who cannot read a map, or read in general, jumped all over Social Media to proclaim his choice of State to be incorrect.

For the record Kansas City is the third largest city in KANSAS but don’t let the facts get in the way of Progressive piggishness.

The halftime show was billed as Latino and Hispanic women of strength.

I’d ask which one, Latino or Hispanic, but by the time the gyrating and humping was over one of the women of strength had become a Columbian and then an Arab because of the way she used her tongue.

I’m sure Ahab was thrilled.

I guess the other one didn’t have any new moves so she remained Jenny from the Flock.

You cannot make this stuff up!

The collective absurdity of the Democrat-Liberal-Progressive is monstrous and apparently without end. I read a comment on a post recently that stated “If you are still voting Democrat you are either stupid beyond hope or horribly evil.”

Between coin flips and a broken app the only thing left for the Democrats in Iowa was for everyone to take a victory lap, proclaim they all shocked the world, and head to New Hampshire.

Punchy participation trophies for all.

As this was happening Mini Mike instructed his paid propagandists at Bloomberg News to write more garbage about President Trump and then proceeded to purchase many millions more of television and radio ads.

Billionaires spending hundreds of millions trying to be as tall as The Donald.

Someone get those two a booster seat and a sippy cup.

Throw Putin in there and it appears Little Man Complex is a real thing.

I’m sure Obama would do nicely in this group due to his “flexibility”.

The State Of The Union became front and center but before it was given, everyone from the Press outlets, except CNN, was invited in for an off the record briefing.

The White House didn’t want to say it but that move had to be made to guarantee Hillary didn’t see it first.

During the SOTU the collective IQ of 24 known as Democratic Congresswomen broke out in cultural misappropriation wearing all white while trying to understand President Trump’s usage of facts, history, and polysyllabic verbiage.

The only thing missing was their hoods.

Even with the Pelosi Paper Tantrum and the I’m Taking My Toys And Going Home Bartender, the classic Progressive moment came when the Governor of Michigan stood up and stated that the roads in her State were so bad they needed a child to fill the potholes.

She said this with PRIDE.

This behavior supported and brought to you Chipotle, Nike, and Kunta Kinte Kaepernick where you are one burrito or a pair of shoes away from projectile vomiting, child labor, and/or the Coronavirus.

Finally, the Senate finished with their melodrama and got down to business.

Everyone including VoMit Delecto Romney voted as expected and the latest shot in the dark by the Liberals was cast aside like Ilhan Omar’s husband when her brother became available.

Oh Jason you cannot say that!