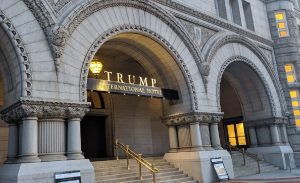 California lawmakers, in the eyes of many, do not appear to be doing very well on lawmaking. A new bill that is being proposed will not disappoint those who think that the laws being created are not very good ones.

Democratic state Assemblyman Evan Low introduced a bill that would prohibit state agencies from spending taxpayer’s money at any hotel that is owned by President Trump or his family.

Low has given a statement which declares that employees of any state agency, the legislature, the judicial council and the University of California and California State University systems could not spend money at any Trump owned hotel while traveling for work.

Low’s statement said, “Public officials, at any level, should not profit off the constituents that they were elected to serve and represent. No branch of government is above the Constitution, and this legislation will ensure that California taxpayers are not further exploited by Donald Trump’s violations of the emoluments clause.”

The bill refers to President Trump as the current occupant of 1600 Pennsylvania Avenue and does not mention the president by name but Trump happens to be the only president in American history who owns hotels.

The bill reads, “This bill would prohibit a state agency, as defined, from paying, reimbursing an employee, providing a per diem allowance, or contracting for the cost of lodging, procuring a good or service, or any other expense at a lodging establishment where the owner, as specified, is the President of the United States.”

State employees are allotted $90 per night for hotel stays and quite honestly, Trump hotels and resorts exceed that amount. Of course, if lawmakers wish to spend more of their own money, they could stay at a Trump hotel.

Only one state worker, since 2016, has booked a stay at a Trump hotel.

Other states, other than California, have lawmakers who have stayed in Trump resorts. Forty-seven state officials that include twenty Republican governors made sixty-four visits to Trump owned properties since Trump took office. At least ninety members of Congress visited Trump properties one hundred and eighty-eight times since January of 2017.

It is not the first time that California has put restrictions on travel by state employees.

There are other states that are restricted from state employee travel. Attorney General Xavier Becerra in 2017 added Texas, Alabama, South Dakota and Kentucky to the list of North Carolina, Kansas, Mississippi and Tennessee, which were already on the list. The states which are restricted because of claims that those states have laws that discriminate against lesbian, gay, bisexual and transgender people.

I don’t know how you, my readers, project yourselves when traveling or just going about your daily routines, but I don’t wear a sign on myself that says that I am a straight woman.

I’ll assume most gay people do not wear signs that show their sexual preference so why is this law needed?

I assume some states are not crazy about gay rights parades but then I don’t believe that those parades are actually appropriate for children to see.

In my opinion, what is done behind closed doors between two consenting adults, is their own business.