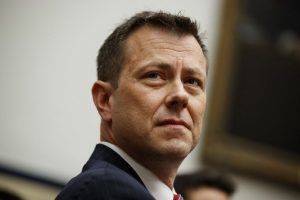 On Monday, in Washington D.C. federal district court former FBI agent Peter Strzok argued in a court filing that his anti-Trump messages were protected under the First Amendment.

Strzok is suing the U.S. government and wants to be reinstated in his position with the FBI even though his messages were sent on FBI issued phones. Strzok was involved in high ranking positions in both probes into Hillary Clinton and then citizen Donald Trump.

In his response brief, Strzok claimed, “Firing an employee for the content of his or her non-public communications is unconstitutional, irrespective of any balancing of interests.”

Strzok’s brief also referred to President Trump’s “unpresidential tweets.” In addition, Strzok also argued that his texts should be considered private speech. He disputed that he should not be held to the tougher legal standard under the famous 1968 Supreme Court case Pickering v. Board of Education that applies to public statements by government employees.

At one time, Strzok was the FBI’s head of counterintelligence.

The brief went on to say that he was entitled to “develop a full factual record through discovery. It also pointed out that it would be premature to dismiss the case at this early stage.

It was also pointed out that the DOJ’s position would “leave thousands of career federal government employees without protections from discipline over the content of their political speech.”

The filing by Strzok was in response to the Justice Department’s motion to dismiss his complaint for reinstatement in November.

The court had been told that Strzok had admitted to conducting FBI business on his personal iMessage account.

The material was said to be secure even though Strozk’s wife had gained access to his phone. The wife also found evidence on the phone that Strzok was having an extra marital affair with Lisa Page.

Page had been an FBI lawyer and was also involved in the Clinton and Russia probes.

It is alleged that Strzok had engaged in a “dereliction of supervisory responsibility” by failing to investigate the potentially classified Clinton emails which had showed up on an unsecured laptop which belonged to Anthony Weiner at the time that the 2016 elections were approaching.

Page is also suing the FBI and DOJ in claims that there was a breach of the Federal Privacy Act. Page said she suffered numerous damages because of the disclosure, including a “permanent loss of earning capacity due to reputational damage” and “the cost of therapy to cope with unwanted national media exposure and harassment” which happened by way of tweets and statements by Trump.

Besides this, Page’s complaint also sought reimbursement for “the cost of childcare during and transportation to multiple investigative reviews and appearances before Congress,” the “cost of paying a data-privacy service to protect her personal information,” and of course, attorney’s fees that were incurred.

I tend to disagree with some of the accusations made by Strzok and claims for financial reimbursement made by Page.

But, then again, these claims are up to the court to decide. I do not have a say in these matters.

I am, however, sick and tired of government expenditures that I don’t agree with. These people, in my opinion, broke a sacred vow to this country. That promise was to abide by the Constitution of the United States.

The very fact that people in high positions in government affiliated agencies were not held to a higher standard of unbiased procedures is appalling.

I write for http://DefiantAmerica.com, http://aleadernotapolitician.com/ https://magamedia.org/ and http://FreeAmericaNetwork.com & Graphic Artist & Video producer. I adore journalism. Politics seems to be my preferred genre although I do not hesitate to write anything that strikes me as interesting. Researching and finding 'Breaking News' makes my blood rush. I've written seventeen books. and over that including books in conglomeration with others. Doing graphic art design has always been fun for me. Sometimes I incorporate this talent into my articles or when a special 'feature picture' is required. You can find me tweeting on: https://twitter.com/DavedaGruber You can always find my articles on the sites I write for.
View all posts by Daveda →
Tagged Lisa Page, Peter Strzok. Bookmark the permalink.