President Trump: Soleimani Should have been Killed Years Ago 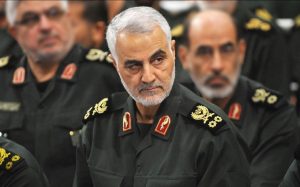 On Friday President Trump made it clear that Iranian General Qassem Soleimani was hated and feared in his own country and should have been taken out many years ago.

Trump was slinging back at people who have criticized him over the airstrike in Bagdad, Iraq that killed Soleimani, who was the top military general.

Here’s Trump tweet that told us about the death of Soleimani:

….of PROTESTERS killed in Iran itself. While Iran will never be able to properly admit it, Soleimani was both hated and feared within the country. They are not nearly as saddened as the leaders will let the outside world believe. He should have been taken out many years ago!

The tweets from the president came after the Pentagon confirmed that Soleimani, who was responsible for the deaths of hundreds of American and coalition service members was dead.

Also, other military officials at Baghdad International Airport were killed during the airstrike.

The State Department went on to say that Soleimani, who was considered the most powerful men in Iran, was guilty of the wounding of thousands more Americans and coalition members.

A designated terror group since 2007, the elite intelligence wing called Quds Force, was led by Soleimani for many years.

Quds Force is estimated to have 20,000 members and it considered Soleimani was referred to as its shadow commander or spymaster.

Iranian President Hassan Rouhani has vowed to take revenge for what he called a heinous crime carried out by the U.S. Rouhani said, as well, that Iran would “raise the flag” of Soleimani “in defense of the country’s territorial integrity and the fight against terrorism and extremism in the region.”

The US bears responsibility for all consequences of its rogue adventurism.

Soleimani’s deputy commander since 1997, Brigadier General Esmail Ghaani, will take over for the now deceased Soleimani.

The State Department on Friday issued a security alert that urged all U.S. citizens to “depart Iraq immediately” due to heightened tensions in the region.

The alert said, “Due to Iranian-backed militia attacks at the U.S. Embassy compound, all consular operations are suspended. U.S. citizens should not approach the Embassy.”

In addition, the agency shared phone numbers people concerned about U.S. citizens and other loved ones in Iraq could call toll free for information.

On Friday Trump tweeted this:

Iran never won a war, but never lost a negotiation!

Secretary of State Mike Pompeo on Friday said that the strike was carried out to prevent an “imminent attack” by forces directed by Soleimani.

He added that the strike was carried out to prevent an “imminent attack” by forces directed by Soleimani.

On Friday Pompeo was on “Fox & Friends” and said, “I think the Iranian leadership understands President Trump will take action. . . . We made very clear that these responses would be swift and decisive. We have now demonstrated that. I hope the Iranian leadership will see that and see American resolve and that their decision will be to de-escalate and take actions consistent with what normal nations do.”

Who would want to go to Iran? Not me. Would any of you book a flight to Iran? I didn’t think so!

I write for http://DefiantAmerica.com, http://aleadernotapolitician.com/ https://magamedia.org/ and http://FreeAmericaNetwork.com & Graphic Artist & Video producer. I adore journalism. Politics seems to be my preferred genre although I do not hesitate to write anything that strikes me as interesting. Researching and finding 'Breaking News' makes my blood rush. I've written seventeen books. and over that including books in conglomeration with others. Doing graphic art design has always been fun for me. Sometimes I incorporate this talent into my articles or when a special 'feature picture' is required. You can find me tweeting on: https://twitter.com/DavedaGruber You can always find my articles on the sites I write for.
View all posts by Daveda →
Tagged Ayatollah Ali Khamenei, Esmail Ghaani, Hassan Rouhani, Javad Zarif, Mike Pompeo, Qassem Soleimani. Bookmark the permalink.